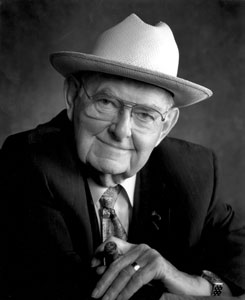 Jim Graham’s entire life revolved around agriculture. He grew up on a cattle farm in Rowan County and graduated with a degree in agriculture from N.C. State University in 1942. He began his career as an agricultural teacher, before becoming a research station superintendent. He also held positions as a fair manager, secretary of the N.C. Hereford Association and as manager of a farmers market before being appointed agriculture commissioner in 1964. He was elected to the post nine times. He continued to operate a cattle farm in Rowan County throughout his career. He chose not to run for a 10th term in 2000 and retired from a life of public service in January 2001.

Jim Graham’s trademark Stetson hat, size 151/2 cowboy boots and cigar made a striking figure and a longtime symbol of North Carolina agriculture. His 6’4” physical stature was equally matched by his larger-than-life persona and tenacious manner when he was fighting for the programs he believed in. He had an uncanny ability to remember which towns were in which county and upon meeting people he could usually come up with a name of a relative of theirs. This led to a sincere belief in the campaign slogan, “Jim Graham is my friend.”

During his years as agriculture commissioner, Jim Graham secured funding for a number of outstanding programs and facilities for agriculture and consumer services. These include programs to eradicate the boll weevil in cotton, eliminate pseudo rabies, cholera and tuberculosis in hogs and provide free soil samples to all North Carolina residents. He developed a network of five state-owned farmers markets and three agricultural centers and seven animal disease diagnostic laboratories across the state. He started the “Goodness Grows in North Carolina” marketing program, expanded the N.C. State Fair and set up a program to check every gas pump, scale and price scanner in the state for accuracy.

Jim Graham possibly received every award in agriculture, including the National 4-H Alumni Award and Progressive Farmer’s Man of the Year. He cultivated one of the top agriculture departments in the nation and was recognized by many national organizations for his vision.

Jim Graham was the face of North Carolina agriculture for nearly 40 years, earning him the nickname “The SodFather,” and induction into the North Carolina Agricultural Hall of Fame.

Elected to
the
North Carolina
AGRICULTURAL HALL OF FAME
2008

View PowerPoint from the induction ceremony